the threads that tie gentrification to displacement are complex and not always visible. this evidence is sometimes circumstantial and occasionally relies on intent. politicians, landlords and developers use the rubric for displacement very literally. in their narrow view only direct displacement exists through a first person action of removing people from their homes. all these players exist in denial of the more subtle displacement that disguises itself behind the laws, eviction processes, the development process or the rise in land values. these cases are used to argue that protections are in place and it is the responsibility of the displaced for losing their rights and homes. the following illustrates the mental and legal pressures of how gentrification has led to homelessness.

david is a 40 year old, college educated, white male, percussionist and music teacher living in highland park with his pit bull for nearly ten years. his girlfriend is constant guest at his apartment. he rented a one bedroom that shared the upstairs landing with another unit in the same restored victorian home. the original owner of the house was an artist and his wife who lived down stairs and painted in a studio-shed in the back of the property. the artist-husband passed away and eventually the property changed title. the new landlord purchased the house in 2009 and proceeded to raise the rent to the legal limit of 3% each year to the current $750 a month.

the demographic of both landlord and tenant is in contrast to the highland park’s typical residents of 2009. it does show what gentrification is truly about which is wealth and poverty. the new landlord is an african american, approximately 30-40 years old, lgbt, nurse and midwife. the business she operates on the ground floor of the house is a holistic healing center for stress and trauma. the property was purchased and is held in trust by her mother.

the home was built in 1900 and subdivided some years later into four units, the ground floor, upstairs has two one bedroom and one studio unit. having been built before october 1978 and with multiple units places it under the rent stabilization ordinance (RSO) or rent control protections. the los angeles housing department at the time deemed the studio unit illegal and the landlord lost a portion her rental income. the remaining units are still very large and are situated in the tree canopy on a quiet street in the heart of highland park. the other tenant is a retired woman on a fixed income working part time as a museum docent in pasadena.

after about three years of incremental rent increases the landlord began a series of harassing behavior with threats to evict. david sought legal advice and more information about his rights many months before the situation escalated. the landlord accused him and his dog of damaging the exterior moulding of a door to the historic home, as well as, his dog was not part of her lease agreement. she issued a “three day notice to quit” which is primarily used to correct a violation of the lease or late rent. often times we have found landlords use these to intimidate or expel uneducated tenants. david offered to pay for the damages, but also learned that his dog was legally allowed as it was part of his original lease with the old landlord. in an attempt to mitigate the conflict, both sought estimates to replace the damaged moulding. david’s estimate came in under $1000, while the landlord’s repair estimate topped out at more than $3500.

the tensions build over the cost differences. the landlord appears to rewrite the house rules as they suit her with a consistent message that she wants him to leave. in one such instance residents are not allowed to park in the ample driveway or property for any reason including loading or unloading. eventually the tensions become so bad that we witness shouting matches between the two on the property. the tenant david was eventually served with an “unlawful detainer” or eviction suit. this might be explained as micromanaging by a novice landlord unfamiliar with the laws and procedures, however the outcome seems to prove differently.

as the day in court approached it became more apparent that the law was on the side of the tenant. instead of the judge deciding who and which amount was reflective of the repair work on the door, the landlord settled with a relocation payment of $7000 for the tenant to move out within (90) days. if one examines the rental data at the time, david’s unit could have been rented for $1200 for its size and exclusivity. that would make the relocation payment and repairs easily recoverable within eighteen to twenty-four months from a new tenant’s rent. the story of many displacements are rooted in this type of subterfuge of a dogs, damages or late rents. because the unit was under RSO the tenant had to break the terms of the lease before the landlord could legally evict them, in this case the landlord used the dog and the door. whether the settlement was a victory for the tenant or the landlord add to this a distressing fact, the legal minimum for a relocation fee in RSO protected housing is $9000 for a single individual.

what happens next is the greater tragedy. many times every person’s first impulse is to blame poor people for their own poverty with the choices they make and their lack of desire to compete or achieve. david’s income for a single male is on the border of poverty. it is difficult for him to admit, but he acknowledges he is not in the mainstream. his bank account like most americans is 2-3 months away from depletion should he lose his job. david maintains his teaching position at a music school in east la, tutors several students and has occasional odd jobs or musical gigs. now, he is faced with a false windfall of $7000 meant to secure his future housing. in his last 90 days he searches for housing options that would include his dog similar to the quality of life he has enjoyed for the last seven years in of highland park. he is developing a vague understanding as he starts to calculate that it may not be possible. he considers room mates and smaller units as options.

then, another rationalisation begins to occur in david’s mind, $7000 is the largest amount he has ever had in his bank account. he could effectively have a savings account now of some worth. however, he also quickly realises if he were to rent an apartment at the current rates, that savings amount would disappear very quickly. david has made his next rational decision based on a future hope to protect his newly found savings and save more money for something that is equal or better. he gives up his housing. many months later i would hear this story again and again from people living in the encampments of the arroyo seco before cedillo’s homeless sweeps. while david couched surfed for many months, he secretly moved into a rehearsal space where he stores some of his possessions. he also works there on the weekends. three years later he still showers at his friends house, the dog stays with other friends. david still sleeps the nights at his place of work without their knowledge.

david’s name has been changed and the description of the location where he is living has been minimised to protect him from retribution. 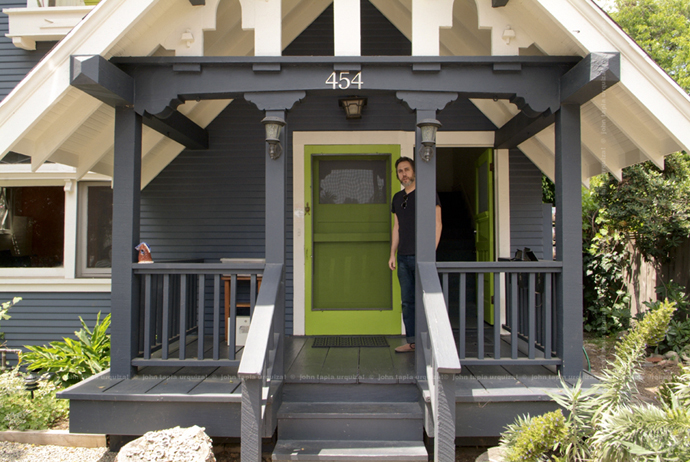